Since
the day we arrived, we’ve heard about the Copa Mundial (imagine the
red-headed announcer from Dave Letterman saying in his booming-est
voice "The KO! PA! Muuuuuuuun-Deee-ALLLLLLL! That’s how it sounds on
the radio.)

The Copa Mundial is the World (mundial) Cup (copa)
soccer championship and this year it’s in Germany. In Costa Rica, we
call it futbol. And we are quite passionate about it. 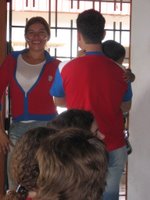 Despite this passion, Costa Rica almost NEVER plays in the World Cup. They’ve qualified like 3 times in history. Germany on the other hand qualifies like every time. Costa Rica is the size of Vermont and
raises the loveliest least confrontational people in the world. They
just don’t have the killer instinct. But what they lack in that "Gotta
Win" determination, they make up for in team spirit.

This
year, we qualified. AND we were to play the opening game. Oh my, this
is big. Very very big. In fact, the entire country took off work and
school today. Oh, yes, we’re talking major excitement around here.

We were invited to watch the game with our Amistad Institute buddies: Marcus, the owner, and his staff, which includes our much-loved instructor Isac (E-sock).

I
hate having my picture taken lately. I’m fat. Yuck. Actually, I just
look fat. When Ryan was 4, I asked him if I was fat. (Yes, he’ll need
therapy later. I’m aware of this.) He was thoughtful for a moment and
then he said, "You’re not fat, Mommy. You look fat. But you’re not
fat." I’m going with that.

We
were ordered (in the nicest possible way) to wear our camisas rojas
(red shirts) and not to eat beforehand – we would feast on gallo pinto
(see tomorrow’s post), tortillas and natilla, roasted plantains and coffee. Um, this would not be the Breakfast of Champions. Which may be one of the reasons why ticos don’t have any killer instinct. Too many carbs… 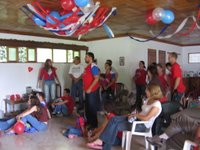 The
party started at 9am. There were about 30 of us, all dressed in red.
Plus we had to do a little face-painting, ala Super Bowl. Everyone was
extremely excited, all whooped up. I’m not a sports fan, none of us
are… Hal never turns on The Game (yahooooo!) But the thrill and pride
the ticos feel over their guys getting to play in the big leagues is catching. I wanted us to win!!!!

The
funny thing is, everyone has known all along we didn’t stand a chance
of winning. The feverish hope was that we wouldn’t be creamed by the
Germans with a score like 5 to 1 or, worse, 5 to nothing… But the
emphasis has been on the thrill of having qualified for the World Cup.
And there was hope. We COULD win. It’s been known to happen and why not
today?

So
we gathered round the tube, we hooped and hollered. We sang all the
songs. Clapped all the claps. Blew the kazoos. We cheered when the ref
called on the other team. Shrugged our shoulders when the ref called on
us. Which was rare…

And of course, the whole thing was in Spanish. Have I mentioned this
before? Everything is in Spanish. It’s the darndest thing. So it was a
little difficult to follow along.

Of course, I have a hard time
following along with 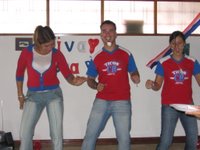 televised sports in America so I just watch the ball.  I did notice if a tico player knocked down a German guy, the tico helped him up. This is just so tico!

Costa Rica did lose the game 4 to 2. A very respectable finish. Which called for more cheering, singing and dancing. We may have lost the game, but every ounce of enthusiasm is still intact!