This morning, I had my second private Spanish lesson with Esther at the Amistad Institute. Esther is our beauty queen profesora de Español. She is charged with teaching me to speak the language!!! Which I am going to learn come hell or high water.

I confess to being sick to death of spasms of homesickness. It’s definitely on the wane as we become more at home, more involved. I’ve joined a few English speaking groups: there’s the little theatre group in San Jose. And an anonymous group of friends of friends who meet two or three times a week (sorry to be so cryptic, but they insist. I gotta play by the rules to play.)

Then there’s a newcomers women’s club that meets monthly. I don’t seem to have much in common with these ladies. Last month, they talked about the intricacies of orchid propagation… I’m just trying to keep my plants alive, much less breeding. But, hey, they speak English, they are women, expats… and they serve brownies and coffee before the meeting. I guess I could hang with them for an hour or two a month!

This all helps assimilation. But the only way to CONQUER homesickness, to assimilate, to immerse, in a foreign country is to learn the language. Otherwise, you remain isolated, an outsider. Not that the Costa Ricans treat us like outsiders – not at all. Costa Ricans are truly the warmest, loveliest people I’ve ever known. They go out of their way to interpret what I’m trying to say.  But communicating is so difficult, it requires so much brain power you don’t relish leaving the house. Yuck. That’s no way to live.

And aren’t we here to experience Costa Rica? How can we do that if we don’t speak Spanish? And why am I taking all this time to justify spending 3 hours and $30 a week with the lovely and charming Esther? It’s simply a great idea. One of the best I’ve ever had, I do believe. 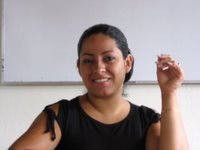 Wow – I just had a micro-epiphany. Simply the effort to call the Amistad Institute, set up the lessons, pay for them, then go… serves to get me more here (Costa Rica) then there (Key West). Interesting. I’ve always been a big believer in taking action. Action gets results. Occasionally, the result is just a stirred pot, but I prefer that to standing water. It’s how we got here in the first place. Not bad by a long shot.

There’s a bonus to my Spanish lessons! (I’m also a big believer in bonuses…) Not only will I learn Spanish, but I actually walk there. Straight uphill. Nice butt, here I come!!! To see my route to Spanish class, click here.

When we first moved, we had a choice about where to live. There is a town called Escazu on the SW corner of San Jose. HUGE American expat community… our first real estate person practically demanded that we live there: "You don’t want to live in Heredia! Too Tico-y." I do a pretty funny imitation of her – she sounds like Phyllis Diller only not funny. Whiskey smoker’s voice, you could practically hear the ice clinking, see the smoke curl from her nostrils as she spoke. I couldn’t remember her name but did my impression for my landlord, Roz. Roz knew exactly who I was talking about…

Anyway, our choice was pretty much Escazu, living with the Americans with American restaurants, malls, groceries, lifestyle, etc. Or living anywhere else in the entire country. Which requires assimilation and wading thru culture shock.

It wasn’t a hard choice to make at the time – we came to Costa Rica to discover Costa Rica, not to live in an isolated American community. During these first 3 months here, though, I have to admit that I’ve gone back to re-debate that choice…

I pooh-poohed culture shock when I first arrived. I knew it would be different, I knew the Costa Ricans spoke a different language. The roads are bad, services are not what they are at home… well, the list of differences goes on and on. But Pollyanna prevailed. What she didn’t take into consideration – and is still in denial about to a large extent – is the depth to which culture shock reverberates.

Physically, living here is wonderful. The food is fresh, delicious, cheap. The boys walk to the bus stop, about 20 minutes each way. The air is clean, clear. The weather is ridiculously perfect: t-shirt weather in the day, comforter weather at night. And don’t get me started on the cheap, readily-available, exceptional health care!

Spiritually, Costa Rica can hardly be beat. You are definitely closer to a higher power in Costa Rica than in America – she is simply more evident and accessible here. There are reminders everywhere, the people are believers in a kind God and practice their faith. Although, I have to say that Key West is a very close second when it comes to nature and proximity to God. Code Enforcement aside.

Monetarily, Costa Rica is definitely cheaper. Rent, food, electricity, movies, workers, real estate, building, buses – you can take a bus to anywhere in Costa Rica for pennies. Gas is more, cars are more, but they are luxury items here. I don’t think I could give up my car unless I had to. But if I had to, I’ll bet I’d get along just fine and have more money for the movies!

Sandford used to tell me to take life in chunks of 3’s: three months, 3 days, 3 hours. Well it’s been 3 months to the day today since our feet landed on Costa Rican soil and I feel like I’m sorta just arriving NOW. We are definitely here. Definitely staying for the remainder of our year, perhaps a few months more to avoid switching schools in the middle of another school year. Definitely looking at what the world holds for us

Here’s how here I am: I bought Stuff the other day. This is my goose. These are made in Nicaragua. Probably could have bought one there for $5. Cost me a whopping $16 here. Would probably be $50 in the states. And I’ll sell it for $1 when I leave…. But for the moment, I’m nesting and that’s always a good thing. All in all, it’s still a damned interesting time in this household!

Speaking of learning the language and really living in Costa Rica, Hal played golf with 4 guys the other day. They’ve all lived here off and on for many many years and only ONE of them speaks any Spanish at all. Hal had to tell them what was on the menu at the restaurant! That may be existing in Costa Rica, but it sure ain’t livin’. I don’t want that to be me: having Hal interpret the menu… oh no no no no no. Brace yourself, Esther, here I come!